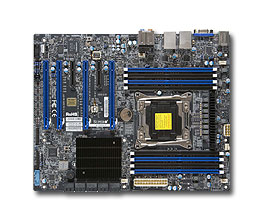 Back in late 2012, I've started to think about my post-Apple days. I knew already that I would not endorse the full cloud crap, and the oversimplification of OS X that follows the iOS convergence. My hardware, my OS, my data.

I'm still running a Mac Pro 2010, with Mac OS X 10.6.8, the last great OS from Apple. Unfortunately (in)security is not what it used to be, and browsers, ssl libraries, etc. are updated frequently and older OSes are no longer supported. So it was time to switch away from 10.6.8 for my online activities. Meaning, it's time to create my multi-headed workstation running various OSes with dedicated GPU.

After about a year spent looking for the right pieces of hardware, I've came up with this BOM:

Hopefully it will yield to great results with virtualization, passthrough of GPUs and USB.
For now, only one GPU, just in case it's not working accordingly. That will allow me to test every OSes I want to use with GPU passthrough. I'll buy 2 more GPUs when it's fully tested and satisfactory.

Due to the exotic nature of some of these pieces of hardware, I've had to order them from four retailers in two countries: Amazon (France), LDLC (France), PC-Cooling (Germany) and MindFactory (Germany).

I've got only one delivery problem, for the PC case: it was delivered through GLS Group, and it took them more than a week to drive 10 km from their warehouse to my home. When it finally went through my door, the box was trashed and the PC case had one foot slightly hammered into the case. It can't stand still on its 4 feet.
Whatever you buy abroad, just make sure it won't be delivered through GLS. The driver was a pain in the ass, calling me to delay the delivery.