In part 2, I was able to create and use a Windows 7 VM with the Radeon R9 270x in passthrough. It works really great. But OSX and Linux where more difficult to play with. 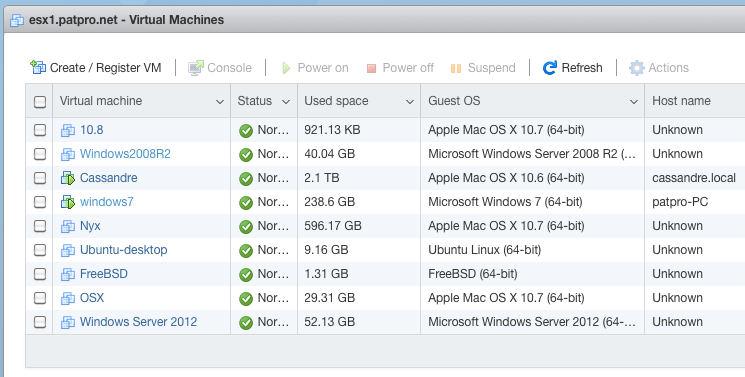 Since then, I've made tremendous progress: I've managed to run an OSX 10.11.6 VM properly, but more importantly, I've managed to run my native Mac OS X 10.6.8 system as a VM, with the Mac's Radeon in passthrough.
I've removed my Mac OS X SSD and the Mac's graphics card from the Mac Pro tower, and installed them into the PC tower. Then I've created the VM for the 10.6.8 system, configured ESXi to use Mac's Radeon with VT-d, etc.
The only real problem here is that adding a PCI card into the PC tower makes PCI device numbers change: it breaks almost every passthrough already configured. I had to remake VT-d config for the Windows VM. Apart from that, it went smoothly.
Currently, I'm working on my native 10.6.8 system, that runs as a VM, and the Windows VM is playing my music (because the Realtek HD audio controller is dedicated to the Windows VM).
Moving from a Mac Pro with 4-core 2.8 GHz Xeon to a 6-core 3.5 GHz Core i7 really gives a boost to my old 10.6.8 system.

Running both OSes, the box is almost as silent as the Mac Pro while packing almost twice as more raw CPU power and 2.7x more GPU power.

The Mac Pro is now empty: no disks, no graphics card, and will probably go on sale soon.

I might also add few SSDs and a DVD burner before year's end.