In part 1, I've written about the BoM of my project and the associated to-do list.
First item on this list was: build the box. That did not go as smoothly as expected. The motherboard was not fully operational: after few minutes of run time (between 5 and 30), it would trigger a CPU overheat alarm, even when the CPU was idle and cool. Supermicro's Support made me tried a new BIOS, with no effect, so I've finally send the board for exchange. The new board arrived but I've had to delay the rebuilt for few weeks.
Now the PC is up and running. The new motherboard seems to work great, but I've not tested IPMI yet. IPMI was the very first feature I've used on the first board, and there is a slight probability that the CPU overheat problem comes from a probe malfunction related to the BMC. Let's keep that for later.

I've chosen to run this box on VMware ESXi 5.5, because it's quite common (more than the latest 6.x), because it sports features I need like passthrough, and because most VMware based multi-sit PC projects like mine are using ESXi 5.x.

ESXi is quite easy to install, I won't give details. Main hdd in the box is installed with ESXi, which is configured thanks to a USB keyboard and a display plugged in the VGA port of the motherboard. After basic configuration (network, user password...), I've switched to remote configuration through VSphere Client, installed on a Windows PC (really a VM running on the Mac). 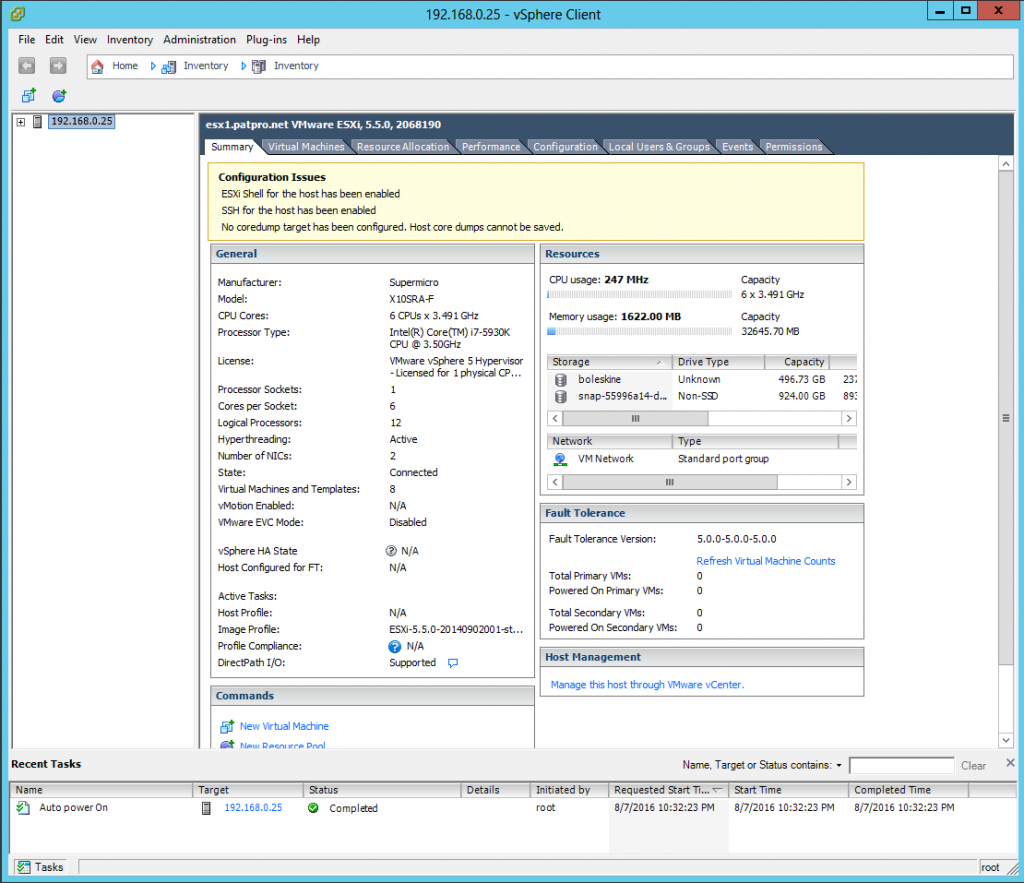 Configuring passthrough for GPUs is pretty straightforward, because I've started with only one GPU, and because these are discrete PCI cards. On the other hand, passthrough of USB controller can be tricky: many controllers, nothing to identify them except trial & error (unless you have the blueprint for your motherboard telling what physical USB ports belong to what controller).

Go to configuration tab, then "Advanced", and finally click "edit" on the right

When you click "Edit…" a window opens that lists interesting devices you can try to passthrough.
Choose some. Then you have to reboot the ESXi and add some of these devices to a VM. 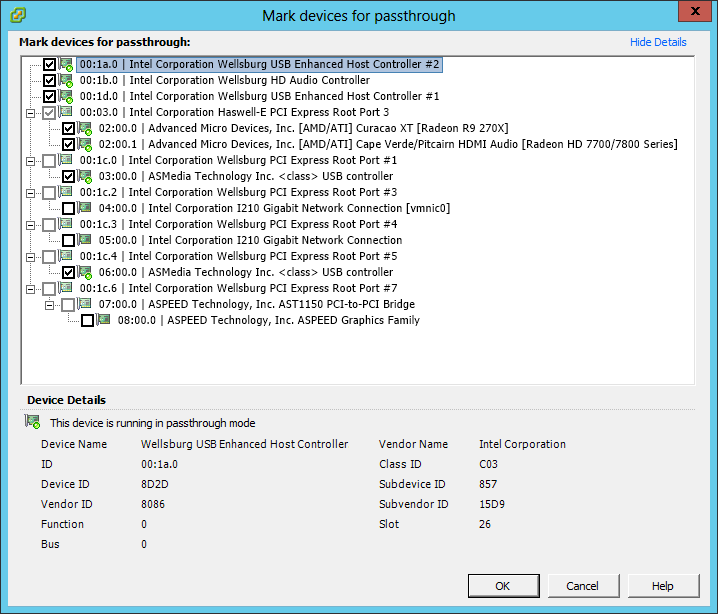 I've created a Windows 7 pro 64bits VM, with raw device mapping pointing to an SSD. I've added every available PCI devices to this VM (USB, sound, GPU) and installed Windows plus updates.
It's important to remember that initially, most PCI devices might not work at all because of missing drivers on guest OS (here it's Windows). Hence, after installing Windows, the Radeon was detected but not used, and only Intel USB controllers where working. I've installed AMD drivers, and ASMedia drivers (courtesy of Supermicro). I've also installed VMware Tools.
After all this, the Windows VM properly uses my Dell display hocked-up on the MSI R9 270x Radeon, and I can interact with the system thanks to a real keyboard and mouse. Passing through the whole USB controller allows me to use any USB device I want. I've successfully plugged-in and used a thumbdrive, a USB gaming headset and a USB hub.
I've made some GPU/CPU benchmarks and everything looks perfect. I've tested Left 4 Dead 2 game play, and it looked great too (I'll probably have to tweak anti aliasing settings to make it perfect).

The Windows part was quite fast to setup, and is almost done now. I've started to fight with OSX and Ubuntu, but things are not easy with both of them. It looks like my 3 years old graphics card it so new that OSX does not support it until 10.11.x, and Ubuntu won't allow me to install Radeon drivers on 16.x LTS because they wait for some software to stabilize before packaging it…