About a year ago, a full MySpace data breach dump surfaced on the average-Joe Internet. This huge dump (15 GiB compressed) is very interesting because many user accounts have two different password hashes. The first hash is non-salted, and represents a lower-cased, striped to 10 characters, version of the user original password. The second hash, not always present, is salted, and represents the full original user password.
Hence, the dump content can be summarized by this :

Of course, people who crack passwords will tell you that the unsalted hashes have no value, because then don't represent real user passwords. They are right. But when you crack those hashes you have a very interesting password candidate to crack the salted hashes. And this is very interesting!

After you cracked most of unsalted hashes, the question is: how do you proceed to crack their salted counterpart? Spoiler alert: hashcat on an Nvidia GTX 1080 is more than 200 times slower than John the Ripper on a single CPU core on this very particular job.

I'm a long time John the Ripper user (on CPU), and I'm pretty fan of it's intelligent design. Working on CPU requires wits and planing. And the more versatile your software is, the more efficient you can be. Hashcat sits on the other end of the spectrum: huge raw power thanks to GPU optimization. But it lacks the most sensible attack mode: "single".

Single mode works by computing password candidates from GECOS data like login, user name, email address, etc. So it makes sense to provide a full password file to JtR, instead of just naked hashes. These passwords metadata are very efficient when you want to create contextual password candidates.
The password retrieved from unsalted hash is more than a clue to retrieve its salted counterpart, in many case it's also the real user password. And when it's not, simple variations handled by mangling rules will do the trick.
You've probably guessed by now: I've created a file where password cracked from non-salted hashes are paired with the corresponding salted hash. The known password impersonate the user login, so that with proper tuning John the Ripper will try only this particular candidate against the corresponding salted hash.
Because of a bug in JtR, I was not able to use this attack on a huge file, I had to split it into small chucks. Nevertheless, I was able to retrieve 36708130 passwords in just 87 minutes. On a single CPU core.
In order to find those passwords with hashcat, I had to rely on a wordlist attack with on a GTX 1080. It took about 14 days to complete. No matter how fast your GPU is (about 1000 MH/s in that particular case), it will brainlessly try every single candidate on every single hash. Remember hashes are salted, so each one requires its own computation. If your file is 60M hashes long, then your GPU will only try 16.6 candidates per second (1000/60). It's very slow and inefficient.

Hashcat performance on a file containing 50% of total hashes.

Sometime, brain is better than raw power. Thank you John ;)

Here is a quick & dirty view of the physical and logical setup of my new workstation. The linux part is not finished yet (no drivers for Radeon GPU, thank you Ubuntu), it's a work in progress. 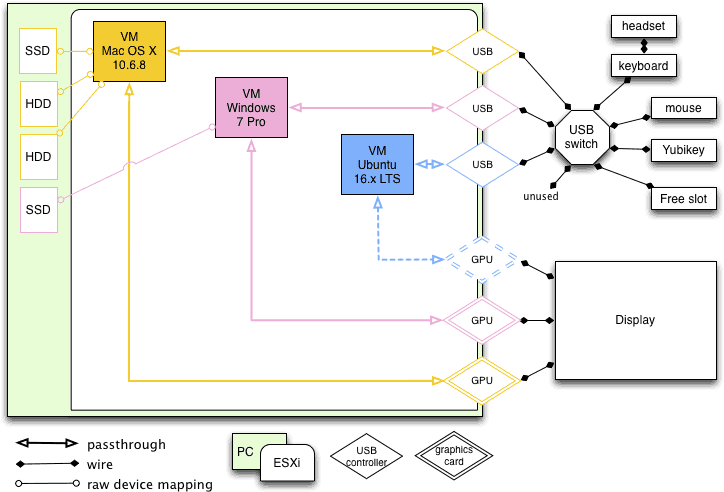 Not depicted: each USB controller sports 4 USB ports (yellow) or 2 USB ports (pink and blue). It allows me to plug few devices that won't be "managed" by the USB switch.
USB devices plugged-in on the switch are made available to only one VM at a time. When I press the switch button, they disappear for the current VM and are presented to the next one.

Cracking passwords is a kind of e-sport, really. There's competition among amateurs and professionals "players", tools, gear. There are secrets, home-made recipes, software helpers, etc.
One of this software is PCFG password guess generator, for "Probabilistic Context-Free Grammar". I won't explain the concept of PCFG, some scientific literature exists you can read to discover all the math inside.
PCFG password guess generator comes as two main python programs: pcfg_trainer.py and pcfg_manager.py. Basic mechanism is the following:
- you feed pcfg_trainer.py with enough known passwords to generate comprehensive rules describing the grammar of known passwords, and supposedly unknown passwords too.
- you run pcfg_manager.py, using previously created grammar, to create millions of password candidates to feed into your favorite password cracker (John the Ripper, Hashcat…).

Of these 61829207 hashes, about 35 millions are already cracked. I've extracted a random sample of 2 millions known passwords to feed the trainer. Then I've used pcfg_manager.py to create a 10 millions lines word list. I've also trimmed the famous Rockyou list to it's 10 millions first lines, to provide a known reference.

No forking, I'm running on one CPU core here. Each word list is tested three times, with no word mangling rules, with defaults JtR rules, and finally with Jumbo mangling rules.

Some results (number of cracked passwords):

That I can translate into efficiency, where efficiency is Cracked/WordlistLength as percentage:

It's quite interesting to see that the PCFG generated word list has a very good efficiency, compared to Rockyou list, when no rules are involved. That's to be expected, as PCFG password guess generator has been trained with a quite large sample of known passwords from the same dump I am attacking.
Also, the PCFG password guess generator creates candidates that are not very well suited for mangling, and only the jumbo set of rules achieves good results with this source. Rockyou on the other hand starts quite low with only 27.7% but jumps to 50.1% with common rules, and finally defeats PCFG when used with jumbo rules.

On the word list side, Rockyou is known and limited: it will never grow. But PCFG password guess generator looks like it can create an infinite list of candidates. Let see what happens when I create a list of +110 M candidates and feed them to JtR.

On the result side, both word list with jumbo rules yields to +21 M cracked passwords. But are those passwords identical, or different?

A high yield basically says that you should run both word lists into John. A yield of 50% means that all pwd cracked thanks to PCFG are identical to those cracked with the Rockyou list.

As a conclusion, I would say that the PCFG password guess generator is a very interesting tool, as it provides a way to generate valid candidates pretty easily. You probably still need a proper known passwords corpus to train it.
It's also very efficient with no rules at all, compared to the Rockyou list. That might make it a good tool for very slow hashes when you can't afford to try thousands of mangling rules on each candidate. 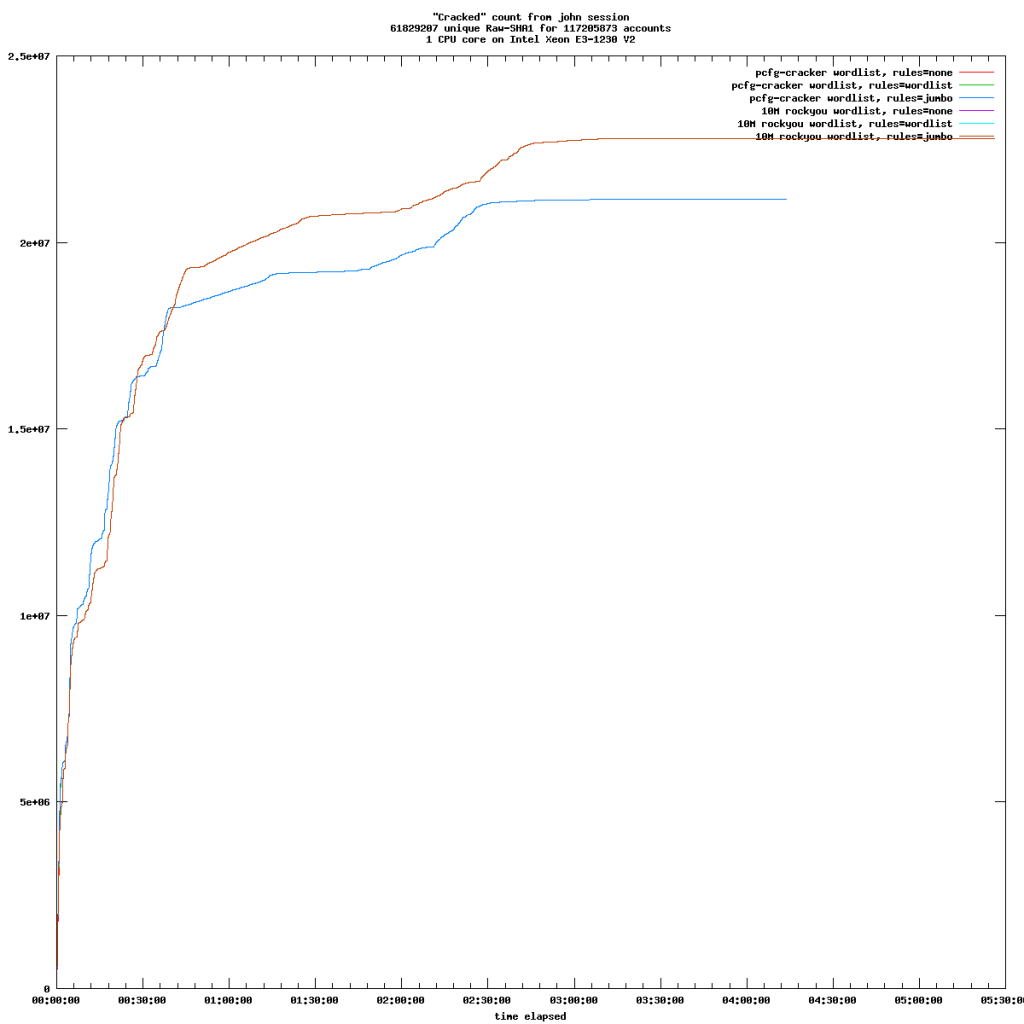 every john session on the same graph 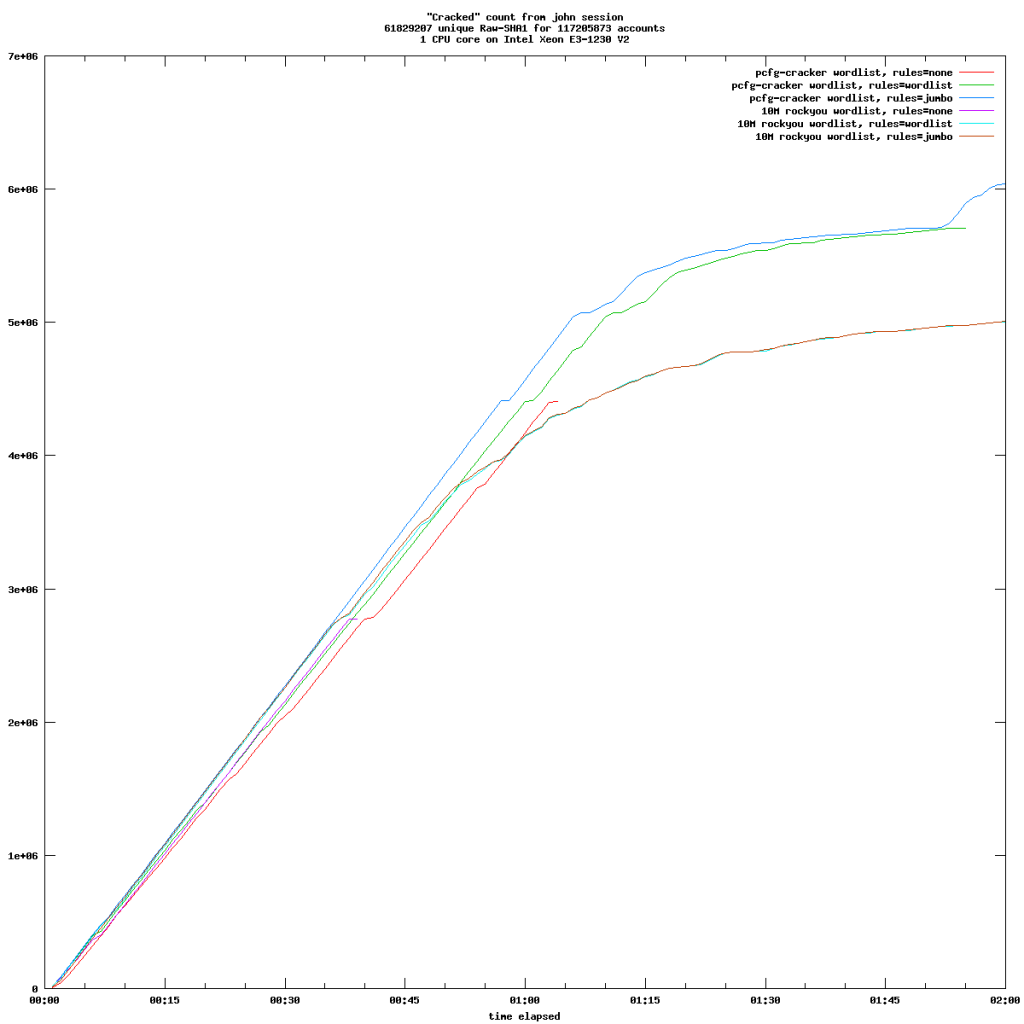 every session, zoomed on the first 2 minutes 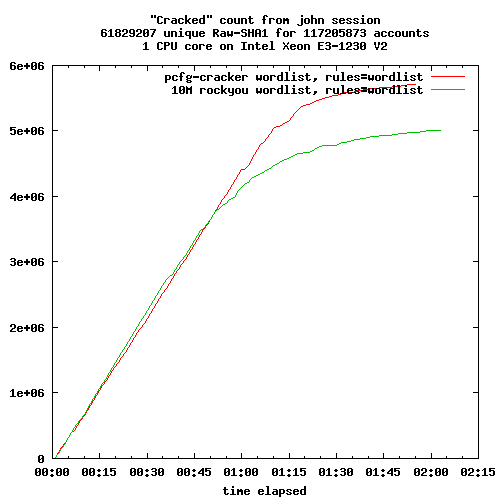 Rules "wordlist" on both lists of candidates 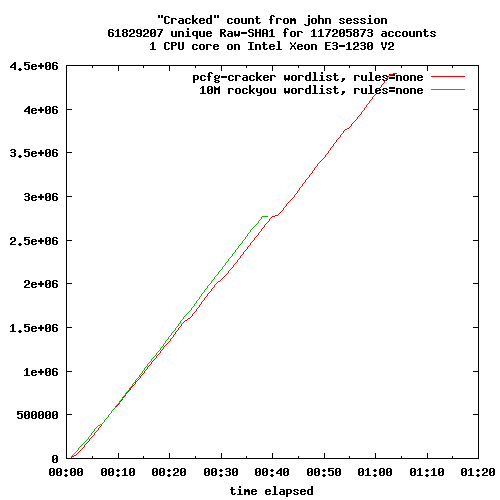 Rules "none", both lists of candidates

Back in december 2012 I've benchmarked (shortly) native and virtualized Mac OS X against virtualized Windows.
Few days ago, I've dedicated a 250G B SSD to a Windows 7 installation, inside my Mac Pro. Weird thing for me to go back and forth between Mac OS X and Windows. I'm more accustomed to +50 days long uptime. Admittedly my various attempts to put Mac OS X into deep sleep, reboot on Windows, and go back later to a fully restored Mac OS X session right out from deep sleep, are failing. That's another story.
Nevertheless, I'm using this Windows system as a playground.

Inside this Mac Pro model 2010, I've one Xeon quad core 2.8 GHz with 24 GB RAM, and a Radeon HD 5770. One SSD is dedicated to Mac OS X 10.6.8, and one SSD is dedicated to Windows 7 Pro 64 bits (with latest stable Catalyst drivers). Both systems are using the latest Steam client with a fully updated and clean Left 4 Dead 2 install.

Windows 7 has better drivers, and may be the game itself is coded better. The fact is some situations in the game are not handled very well by the GPU on Mac OS X. The huge spike around 30 fps means that ~2500 frames were computed at about 30 fps. Not good. But more importantly the global shape of the plot shows a spread of fps values from as low as 10 fps to 60 fps. Note that the log scale on Y does mask isolated frames (Y=1).
Windows does a better job here, with only a handful of frames below 40 fps.

Fortunately L4D2 is an old game, and my hardware is enough to handle it nicely even on Mac OS X (I usually play at 1600x1000), but being able to push it a little further with full quality on Windows is a nice thing. I hope L4D3 will run ok too, some day, in a not too distant future. 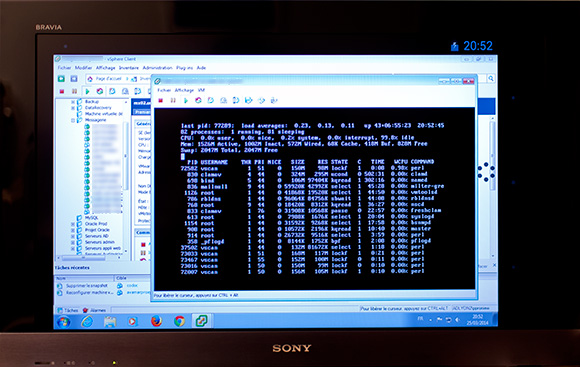