I've been really disappointed by my last benchmark of a virtualized Mac OS X running on top of ESXi with graphics card accessed in passthrough mode. So disappointed in fact that I had to make new tests.
This time, I've decided to ditch the six years old XBench, and to use proper video benchmarking tools: Geeks3D GpuTest, and Cinebench. And guess what? Thats better.
To run those tests, I've had to install OS X 10.8.2 because Geeks3D GpuTest doesn't run on Mac OS X 10.6.8. So I dedicated a SATA HDD on my Mac Pro to a fresh install of 10.8.2, created a VM with it and ran both benchmarks, once from the Mac Pro booted from OS X, once from the OS X VM.

In the chart bellow you can find FurMark and GiMark tests results for a native OS X system running on the Mac Pro, and for the exact same system running as a VM on top of ESXi hypervisor. No tuning was done, I've used the default settings for every benchmarks.

FurMark scores the same frame rate on VM and on native OS X. But GiMark is not good at all, with a VM score 4.5x lower than reference.

Cinebench's results are quite interesting too:

VM results are quite close from reference, but the CPU frequency is reported as 2.663 GHz instead of 2.8 GHz, and the VM has only 4 CPU threads, instead of 8. This explain the CPU performance drop between native and virtualized OS X. The OpenGL score is quite good, showing only a 15.4% drop.
We are very far from the 87% drop on XBench's OpenGL test.

On the left side the native OS X, on the right side the virtualized OS X: 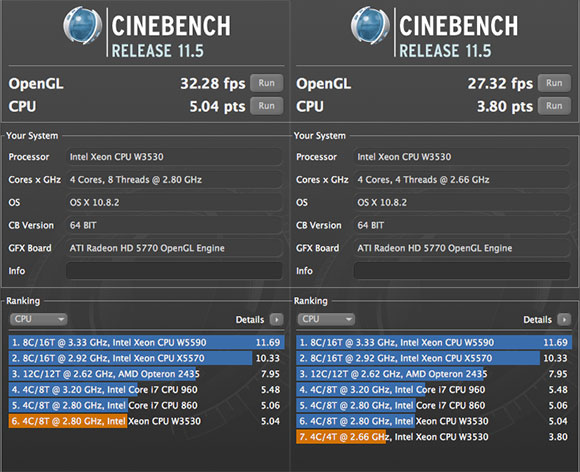